Have you ever been so wiped out that you feel like you need to sleep for a week . . . maybe a month? When you do sleep, do you wake up still feeling drained? If you answered yes, I’d love to introduce you to one of my favorite herbal adaptogens: ashwagandha.

Adaptogens, or herbs that help us adapt to stress, have long been used to help fortify resilience during times of chronic stress. But they don’t just help us stay strong for longer . . . they can help rebuild when we’ve already overdone things. That’s why Ayurveda classifies ashwagandha as a rasayana, or “herb that deeply rejuvenates and promotes longevity.” (1)

Ashwagandha roughly translates from sanskrit as “smell and strength of horse,” and um, part of that doesn’t seem like a selling point. However, according to Herbal Medicine for Beginners:

Ashwagandha might be translated as ‘strength of a thousand horses,’ but its action is quite a bit more gentle and foundational than the image conjured up by the translation! Unlike more stimulating herbs, such as ginseng or eleuthero, ashwagandha is a slow, restorative builder. There’s no big rush of energy, which means there’s no corresponding crash of energy running out.

Instead, each day you have a little more resilience than the day before – until, after a while, you feel like your old self again! Ashwagandha is particularly appropriate in cases of extended exhaustion, depletion, and deficiency.”

The roots of the ashwagandha (Latin name Withania somnifera) can be made into a strong tea that is blended with milk, mixed with coffee, or sipped on its own to “‘tune-up’ the whole system, especially during times of stress and heavy workloads.” (2)

Known in some places as winter cherry or Indian ginseng, ashwagandha root can also be ground into a powder and added to smoothies and other recipes. I’ll share some of the easiest methods for preparing ashwagandha later in this article, but first let’s take a look at its benefits.

Ashwagandha is the type of herb that refuses to be classified as offering just one or two benefits. Although it’s considered helpful for supporting energy levels, its species name – somnifera – means “sleep inducing” in Latin.

Researchers have found that one compound in the leaves – triethylene glycol – plays a role in its sleep promoting properties. (3) Although leaves were used in that study, ashwagandha roots are usually favored because they are thought to be more potent.

In another animal study, ashwagandha influenced the GABA neurotransmitter pathway, which is one of the main sedative neurotransmitters. GABA is associated with improved mood, a sense of calm and tranquility, improved sleep, help with PMS, and calm focus. (4)

Several human studies have shown that it can reduce symptoms in people experiencing stress and feelings of anxiousness.

For example, in one study, participants who received full-spectrum ashwagandha root extract showed signficantly lower cortisol levels and higher resistance to stress than the control group. One important thing to note is that the study was sixty days long. (5) As mentioned earlier, ashwagandha is a “slow, restorative builder” that typically works best when taken consistently for a period of time.

There are a lot of different mechanisms by which ashwagandha supports well-being. One worth noting here, though, is that it seems to help the body reduce cortisol, the “stress hormone.” Adults with chronic stress, for example, experienced an average 30% reduction in cortisol levels when they took the maximum dose of ashwagandha that was available in this study.

According to Botanical Medicine for Women’s Health (and several animal studies), ashwagandha is a powerful immune system modulator, which means it helps balance between an underactive immune system (increased susceptibility to infection) and an overactive one (autoimmunity). (6) (7)

It’s been shown to have a positive impact on natural killer cells, macrophages and lymphocytes, which all help our bodies deal with pathogens. (8) (9) (10)

Ashwagandha has long been recommended in Ayurvedic medicine to help with memory, and recent studies seem to support this traditional use.

According to The Modern Herbal Dispensatory, “Ashwagandha helps boost the conversion of T4 (the thyroid storage hormone) to T3 (the active thyroid hormone).”

The roots of ashwagandha are rich in withanolides, which positively influence the body’s energy production system. (5)

“When you’re in stress overload, your cortisol levels will remain unnaturally high instead of following the daily high-to-low pattern. Elevated cortisol means elevated blood sugar, which then raises insulin – the fat storage hormone.” (14)

Due to its positive influence on cortisol, ashwagandha appears to have a beneficial effect on blood sugar as well. Several human studies have shown it to be helpful for maintaining healthy blood sugar levels. (15) (16) (17) (18)

We know that excessive amounts of free radicals – which our bodies produce as byproducts of metabolism – cause oxidative stress that can lead to accelerated aging and several disease processes. Fortunately, as this Live Science article puts it,

Ashwagandha is regarded as an aphrodisiac in Ayurveda, and some modern research indicates that it is. (21) Recent research also suggests it may have a positive impact on hormone health and reproductive function as well.

How To Prepare Ashwagandha Root

Ashwagandha can be blended with other adaptogenic herbs or taken solo as a tea, tincture or powder. Here are some of the easiest ways to incorporate it into your life:

How To Make Ashwagandha Tea

Roots and woody plant parts need a extra coaxing to release their therapeutic compounds, so when you make them into tea you need to simmer them in water for awhile. This type of herbal preparation is called a decoction (long-simmered tea), and it can be made in relatively big batches that you can keep in the fridge and sip over the course of several days.

Place ashwagandha root and water in a pot and cover with a lid. Bring water to a low simmer and allow herbs to decoct for 20 minutes, then remove the decoction from heat and allow it to infuse for one hour before straining out the ashwagandha root.

How To Take It

The Modern Herbal Dispensatory: A Medicine-Making Guide recommends drinking 1/2-1 cup three times daily. It can be mixed with coffee or blended with the milk of your choice and a sweetener.

How To Make Ashwagandha Tincture

Tinctures are rapidly absorbed by the body, making them a favorite with many herbalists. Here’s how to make one with ashwagandha:

Place ashwagandha root and alcohol in a mason jar and secure with a lid. Place the jar in a dark cabinet and allow the mixture to infuse for six to eight weeks, shaking occasionally.

Another option is to purchase pre-made ashwagandha root tincture and follow the instructions on the label after talking with your healthcare provider.

How To Take It

How To Use Ashwagandha Powder

Traditionally the powder has been mixed into wine or ghee, but I prefer to mix it into smoothies, coconut milk drinks, and nut butter balls. (Keep an eye out for new recipes this fall.)

How much is recommended?

Adaptogens are herbs rather than pharmaceutical drugs, so there are no dosages. However, herbalists do share knowledge about what approaches to consumption seem to produce a beneficial effect for most people.

The suggestions below are based on those found in The Modern Herbal Dispensatory: A Medicine-Making Guide:

The restriction given by the Botanical Safety Handbook is that ashwagandha should not be used during pregnancy due to conflicting information about whether it may act as an abortifacient.

With regard to breastfeeding, the handbook notes that ashwagandha has long been used in Ayurvedic medicine to support lactation.

Ashwagandha is in the nightshade family, so it is recommended that you avoid ashwagandha if you are sensitive to nightshades.

Unlike some herbs that can interact with certain medications, ashwagandha is not expected to have any clinically relevant interactions with other supplements or medications.

Have a question about ashwagandha root? Please leave it in the comments below! 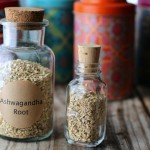 Roots and woody plant parts need a extra coaxing to release their therapeutic compounds, so when you make them into tea you need to simmer them in water for awhile.

This type of herbal preparation is called a decoction (long-simmered tea), and it can be made in relatively big batches that you can keep in the fridge and sip over the course of several days.

The Modern Herbal Dispensatory: A Medicine-Making Guide recommends drinking 1/2-1 cup three times daily. It can be mixed with coffee or blended with the milk of your choice and a sweetener.

No problem, I’ve created a free ebook for you – Kitchen Apothecary: 25+ Natural Remedies Using Ingredients From Your Pantry – as a gift for signing up for my newsletter. You’ll also get updates when I post about safe essential oils for pregnant/breastfeeding mamas, exclusive gifts and coupons (I was able to give away a jar of free coconut oil to anyone who wanted it recently!), plus other goodies.

5. Chandrasekhar, K et. al. (2012) A prospective, randomized double-blind, placebo-controlled study of safety and efficacy of a high-concentration full-spectrum extract of ashwagandha root in reducing stress and anxiety in adults

19. Singh, Narendra et. al. (2011) An Overview on Ashwagandha: A Rasayana (Rejuvenator) of Ayurveda

Continue reading 9 Benefits of Ashwagandha & How To Use It…