Although my paleo almond flour pie crust has been my go-to for years, that was pretty much because I was busy keeping tiny humans alive and couldn’t figure out how to create a rollable dough that was buttery, flaky and SIMPLE.

As in, one that wouldn’t require me to special order 87ish types of flour that my local health food store doesn’t carry. Lately though, my daughter – who published a cookbook with her friends last spring – has been all about developing new recipes, so we decided this was the year to create a rollable dough.

This soft, pliable gluten-free dough is made with ingredients that are pretty easy to find and yields a flaky, golden brown crust that my family loves. It’s also free of xanthan gum, which can cause digestive upset for some people.

Before I share the recipe, here are a few tips for getting the best results: 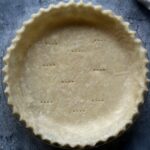 Time does not include chilling time for lard or palm shortening.

Chicken Pot Pie – This homemade chicken pot pie has a buttery crust and creamy chicken and veggie filling that makes it one of my family’s favorite comfort foods. ⁣⁣It’s gluten-free (and dairy-free optional) and can be made into five mini-pot pies or one big pot pie casserole.

Gluten-Free Artisan Bread (Boule Bread) – If you love sourdough bread but just can’t commit to maintaining a starter, this boule bread recipe is for you. It has a golden, crusty outside and a soft, airy inside, and it incorporates yogurt to give it a flavor that is similar to sourdough, but without all the hassle.