The World Economic Forum published two articles on its website which explored how people could be conditioned to get used to the idea of eating weeds, bugs and drinking sewage water in order to reduce CO2 emissions.

“Finding new plant-based foods is becoming increasingly urgent with the world’s population forecast to grow by two billion in the next 30 years,” states an article authored by Douglas Broom published on the official WEF website

“While farming animals for meat generates 14.5% of total global greenhouse emissions, weeds capture carbon from the atmosphere and can therefore help to control climate change.”

According to Broom, “Weeds can be nutritious and tasty” and are easy to grow.

The article fails to explain why weeds such as dandelion leaves, given that they are so ubiquitous, haven’t been made a staple of western diets already.

“The next time a panhandler approaches your car at a stoplight, point to the tasty and nutritious weeds sprouting up through cracks in the pavement and tell him, “Bon appétit!” writes Dave Blount. 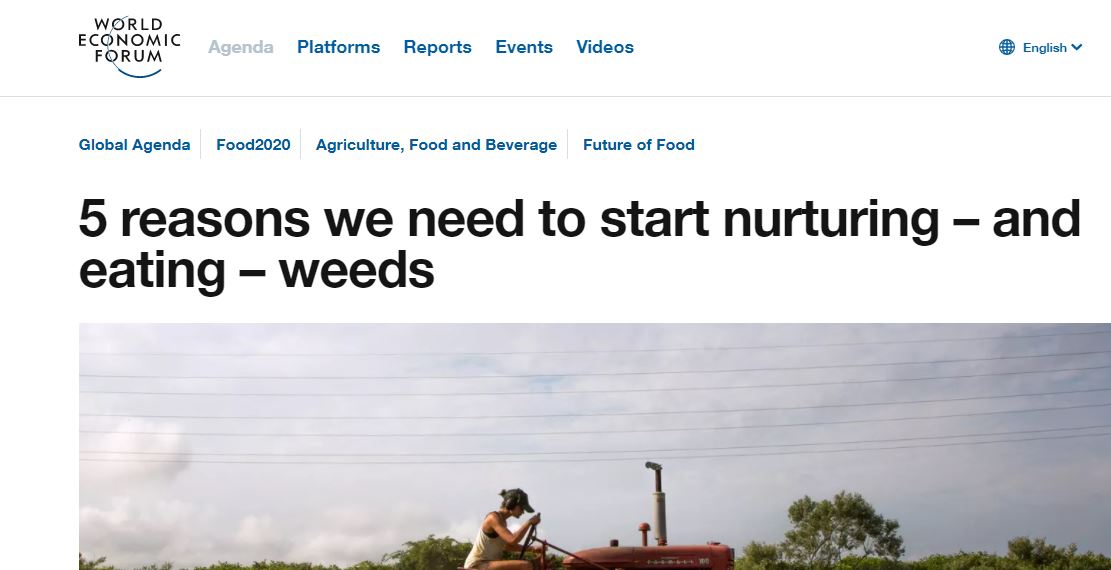 A separate article also published on the WEF website investigates how people can be conditioned to enjoy consuming ‘food’ which on the surface sounds disgusting.

“Responses involving culturally conditioned ideas of what is “natural” may be modified over time,” states the piece, before asking why there is a revulsion against “insect-based foods” and “drinks with ingredients reclaimed from sewage.”

The author concludes that “desensitisation (repeated exposures)” may be effective in “reducing disgust (versus fear)” among the “general population.”

Maybe the WEF will be satisfied when we’re all forced to eat tree bark and roots, food sources that starving peasants in Stalinist Ukraine were reduced to consuming during the Holodomor.

And that’s the point.

The ‘Great Reset’ is about enacting a drastic reduction in living standards for the plebs which will force them to put bugs, weeds and sewage on the menu while the Davos elites continue to feast on the finest cuisine in their ivory towers.