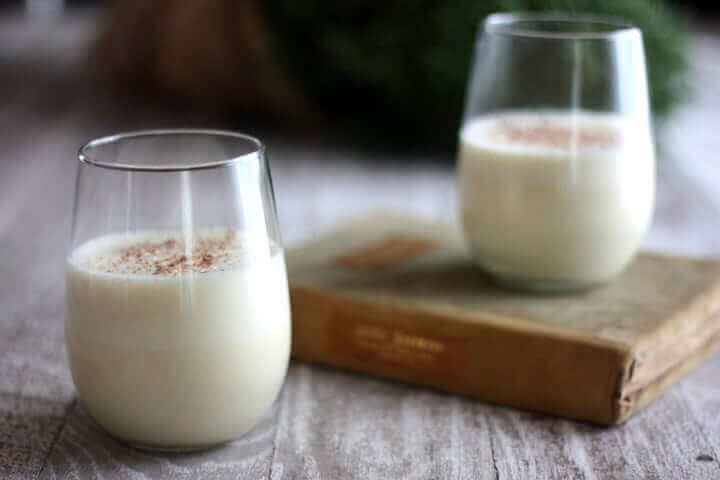 Tis’ the season to whip up a batch of eggnog just like our ancestors used to make – with loads of high fructose corn syrup, artificial flavors, preservatives, stabilizers and carrageenan. What, no? You say that’s not how they made it, and they didn’t make hot chocolate from a pouch, either?

Well then, I think you’re going to love this recipe. Made from wholesome ingredients, this traditional homemade eggnog is smooth, creamy, perfectly spiced, and so easy to make.

There’s one important thing we need to cover about traditional eggnog recipes, though. Most blend raw eggs with cream, sugar, spices and bourbon or rum . . . but are eggs safe to consume raw? What about salmonella?

No nog lover will be left behind by my recipe, which includes several variations to fit different comfort levels and preferences. We’ll dive into the details in a bit, but here’s some general info I came across while researching awhile ago.

Statistically speaking, it’s estimated that about 1 in 20,000 eggs are contaminated with salmonella, which according to the congressional testimony of Dr. Michael Jacobsen means that the average consumer would encounter a contaminated egg once every 84 years. (1) Other sources say it may be one in 10,000 eggs, which would be about one every 42 years.

Also, melons are more likely to be contaminated with salmonella than eggs . . . weird right? (2)

That’s not to say I’m cavalier about safety. When I kept chickens and knew every single thing about how they were raised, how the eggs were collected, and how they were stored, I had a different comfort level with raw eggs than I do when I buy them at the grocery store (even if they are organic and pastured).

That’s not to say I haven’t had a bite of raw cookie dough or cake batter since then, but specifically regarding eggnog safety here are some perspectives I’ve found helpful:

Given that, here are some independently validated options for making safer nog:

This might surprise you, but for over fifty years a group of microbiologists from Rockefeller University’s Laboratory of Bacterial Pathogenesis and Immunology have been making eggnog with raw egg yolks and then letting it age for six weeks before finishing it off. (4) MIcrobiologists, y’all.

“I’ve been here almost 50 years, and we’ve made it every year,” professor and lab head Vincent Fischetti told ABC News. “We usually make it about a week or so before Thanksgiving, sip it to cheer Thanksgiving, and finish it at the Christmas party.”

The recipe contains bourbon and rum, which has an antimicrobial effect as the eggnog ages. Out of curiosity, the microbiologists actually added salmonella bacteria to one batch to see what would happen, and the salmonella died as the eggnog aged. (They didn’t serve that batch at the holiday party, though.)

In another experiment, one Rockefeller microbiologist made a batch of nog with 14% rum and bourbon, then let it sit out at 98.6F for just 24 hours. When they compared their homemade eggnog to one they bought at the grocery store, they found the homemade version was completely sterile while the store-bought one was “teeming with a range bacteria.”

Now, the researcher noted that the bacteria were likely harmless, and personally I go out of my way to cultivate good bacteria in my food (in probiotic-rich yogurt, for example). So I’m not saying sterile food is the goal here, only that the alcohol seems to have had a big impact on the microbial population.

With that said, the researcher noted that the experiment would need to be repeated under a variety of conditions in order to definitely prove whether or not spiked eggnog with raw eggs is safe. Fortunately, both raw egg yolks and alcohol are optional in the recipe below.

Oh and also, 14% alcohol can add a pretty strong punch to eggnog, but there’s a way to make it safely with less. (See my recipe notes) 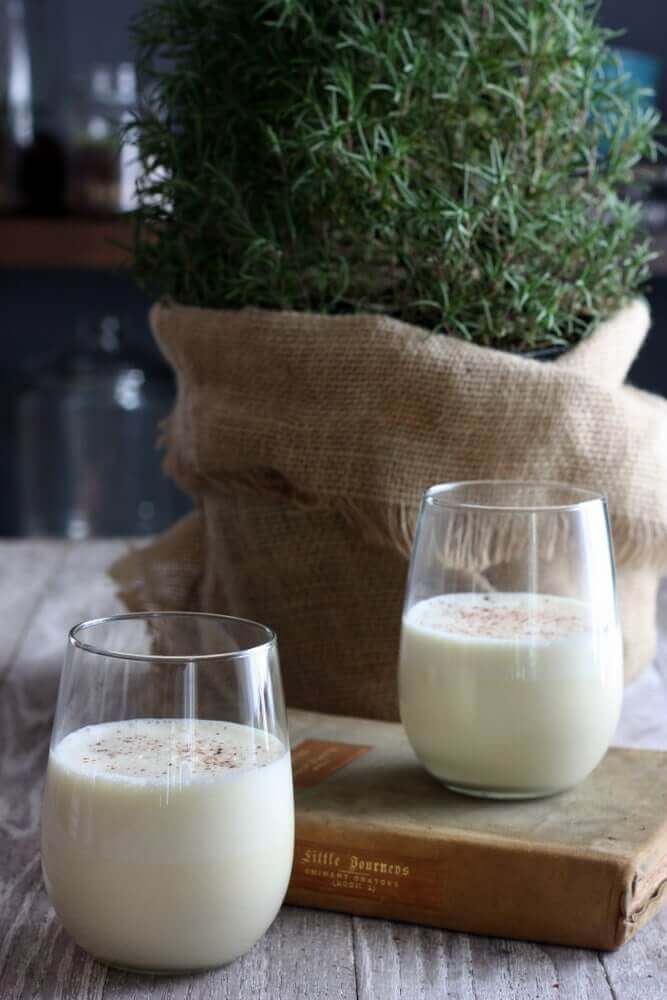 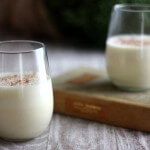 Raw eggs are optional in this recipe. They can increase the risk of foodborne illness. Older adults, pregnant women, infants, and immunocompromised people should avoid eating raw eggs or foods that contain raw eggs.

Notes On Adding Rum Or Bourbon

You can add rum or bourbon to taste, or if you’re interested in using alcohol to increase the eggnog’s safety profile you can adapt this method described by Cook’s Illustrated. The process looks like this:

In the Cook’s Illustrated version,  the egg/liquor mixture is aged for three weeks to mellow out the flavor and give the alcohol time to do its job. However, in a similar experiment done by a microbiologist at the Rockefeller lab only 24 hours was needed.

Eggnog Latte – Based on the eggnog recipe above, this latte has been adapted a little to help the flavor blend better with coffee.

Hot Apple Cider – This spiced cider is super easy to make and can also serve as the base for buttered rum.

1. Senate hearing. Egg Safety: Are There Cracks In The Federal Food Safety System?

2. Popular Science (2017) Don’t worry about eggs—these other foods are way more likely to give you Salmonella