Despite being “the most popular president in U.S. history,” Joe Biden isn’t faring too well on YouTube since his inauguration, where every single video posted to the official White House channel this week has massive downvote ratios.

The media heralded Biden after he pulled off the *stunning* achievement of garnering the most votes in presidential history with over 81 million, beating Barack Obama’s previous record of 69.5 million.

However, Biden being the most popular person to win the Oval Office in history doesn’t seem to translate to enthusiasm for his speeches, which are typically watched online by a paltry amount of viewers.

This effect has also been seen on the White House’s official YouTube channel, where since switching over to the Biden administration’s control every single video has received significantly more downvotes than upvotes.

Indeed, the most viewed clip on the channel, a 31 minute video of Biden’s inauguration, has 9,200 thumbs up compared to 43,000 thumbs down. 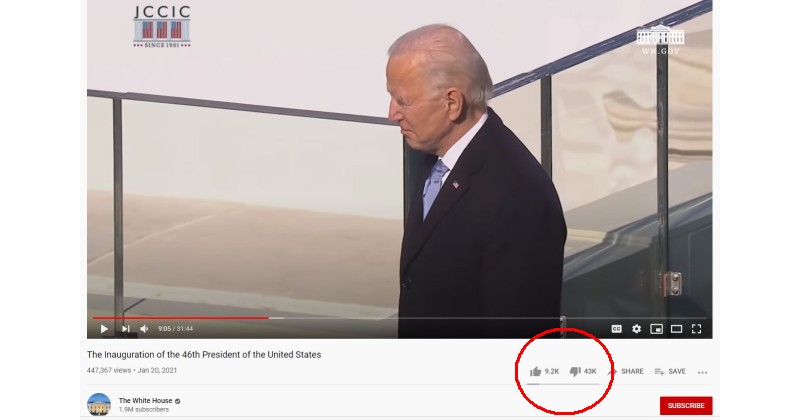 In addition, a video entitled ‘The Work Begins’ which features as the channel’s main video has more than four times the amount of downvotes than upvotes.

The downvotes are obviously the work of disgruntled Trump supporters, but given Biden’s popularity, you’d expect his voters to at least be close to equaling them out.

It’s not happening. Not even close.

Biden is supposedly “the most popular president in U.S. history,” but you wouldn’t know it by looking at his YouTube analytics.